When Flat Justice was just getting going, back in the Summer of 2018, we quickly realised Rent Repayment Order (RRO) judgments at the First-tier Tribunal Property Chamber (Residential Property) (FtT) were not respecting the new regime of the Housing and Planning Act 2016 (HaPA). They were happily using old law in the guise of the Parker v Waller [2012] UKUT 301 (LC) authority, established under the Housing Act 2004 (HA), which gave Tribunals wide discretion in the awards they made.

We argued in our hearings that the HaPA no longer directed awards for RROs to be “such [an] amount as seems reasonable in the circumstances”, as had the HA at section 74(5) and which was used as the justification for this discretion.

When we made this case at our second hearing, Judge Latham retorted angrily:

“Are you asking the Tribunal to be unreasonable?!”

The award in that case was cut to 20% of the rent applied for. That was apparently “reasonable in the circumstances”.

We wrote to the president of the FtT in London setting out our concerns about these ‘legacy issues’ on 1st March 2019 and continued to repeat these arguments through all our subsequent cases.

Fast forward to July 2020 and we have the Vadamalayan v Stewart [2020] UKUT 0183 ruling, ironically not one of our cases: although we must have been the first to use the authority as it was published 17th July on the day we had a remote RRO hearing and managed to bring it to the attention of the rather bemused Tribunal panel.

Vadamalayan, of course, confirmed all we had been arguing for and more. The carte blanche excuse for deductions of “reasonable in the circumstances” was dead. A new chapter in RROs had dawned…or so we thought.

But, like Trump-inspired tax dodgers, some Tribunal panels have since found loopholes in Vadamalayan allowing them to ignore the spirit of this very clear ruling and to continue to slash RRO awards. Instead of relying on s74(5) of HA, they use the deductions allowable under s44(4) of HaPA for which there has been little guidance as to the extent of deductions permitted. These rulings cock a snook at the Upper Tribunal, bypassing Vadamalayan. They continue to let criminal landlords off the hook and cheat tenants of rent which should be rightfully repaid to them.

Here are some recent examples, in no particular order: 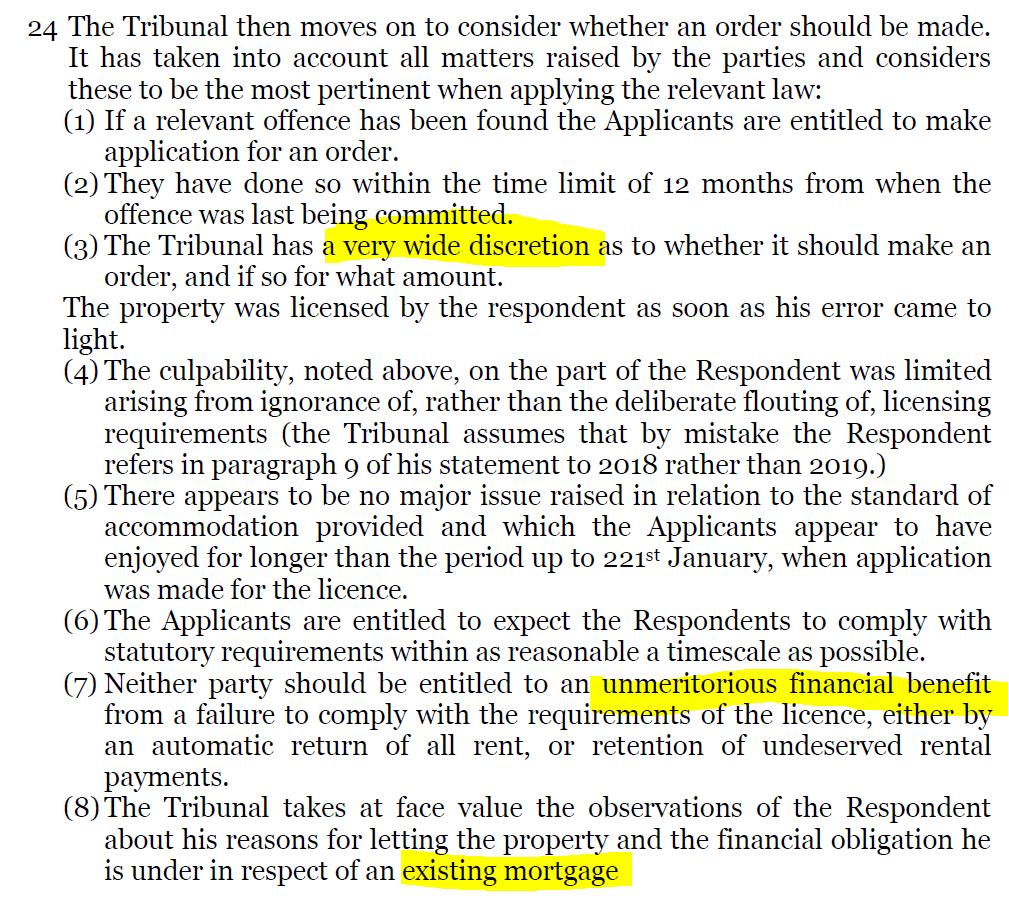 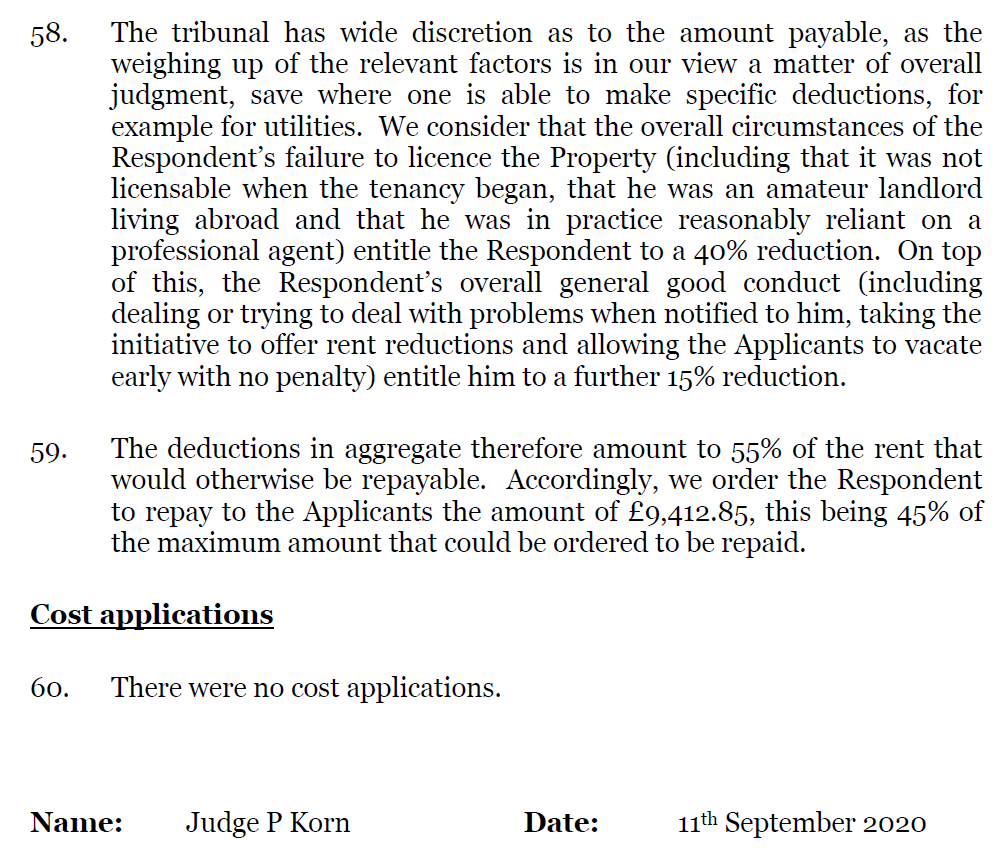 NB: the Respondent landlord in this case provided no evidence for their financial circumstances other than their oral testimony at the hearing. Indeed the R had been barred from proceedings as they had not complied with any of the directions…but were then permitted to take part in the hearing at the last minute. 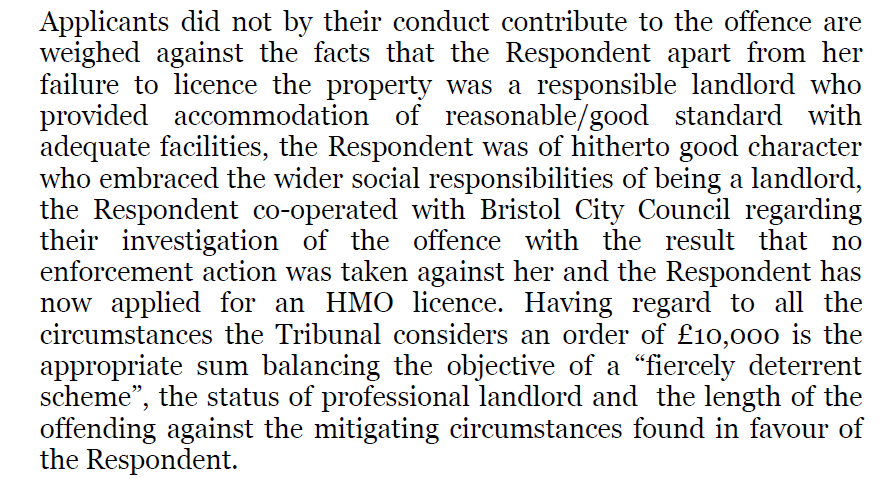 These five cases, across three regional Tribunals, were all decided in September 2020 well after the Vadamalayan ruling. Four of the decisions even discuss the implications of Vadamalayan before proceeding to make the deductions. Section 44(4) of the HaPA, which post-Vadamalayan can be the only basis for deductions, states:

In the above cases there had been no convictions of the landlords so only (a) and (b) applied: the deductions all hinged on conduct and/or the landlord’s financial circumstances.

Taking financial circumstances first, it would be understandable to allow a deduction if the landlord should be in real financial difficulty. However, the Respondent should then be held to provide proper evidence of this. Simply oral evidence at a hearing cannot be enough. Even Parker ruled that such evidence must be presented in a concrete form that was open to be challenged by the As, at §40:

“the tenants would be entitled to know the facts that had led me to do so [i.e. make a reduction], not simply so that they understood the reasons for my decision but so that they could consider whether to seek permission to appeal against it.”

This is as logical and fair just as much as it is regularly ignored by the FtT. Sometimes landlords provide a typewritten, even handwritten, version of their accounts as their “evidence”; or a letter from a friendly accountant; or they just relate their tale of pecuniary woe at the hearing. This is not proper evidence. If landlords are to have deductions made from the award they must be required to supply their most recent tax returns and real proof of expenditure. After all, Rs are attempting to take away from the Applicants the rent which the latter have already proved is rightfully theirs “beyond all reasonable doubt”.

On conduct, Parker is also still relevant. Again, perfectly logically, Parker ruled that only conduct which was relevant to the alleged offence could be accounted for in the making of a RRO award. In that case, at §39, Judge Bartlett ruled that a landlord should not be punished “for matters that form no part of the offence”. Similarly, we see no reason why a tenant should be punished, through a deduction from a RRO award, for matters such as rent arrears which have absolutely nothing to do with the landlord’s failure to license. Indeed, unpaid rent cannot be applied for by the Applicants, so that the landlord wins both ways: a reduction in the RRO award for the rent arrears and the prospect of recovering the unpaid rent through court action (that rent then no longer being recoverable through a RRO).

It is worrying that all the above decisions were made within the space of just one month. Clearly, further guidance is required from the Upper Tribunal (Lands Chamber) to support the Vadamalayan ruling and Flat Justice is committed to appealing any judgment which appears unreasonable in the circumstances.